All I can say is READ IT!

Raising Boys to be Real Men 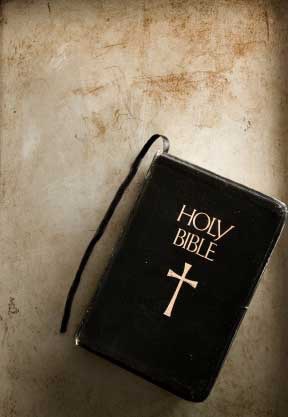 Read this article if you are a “fan” or student of the Bible.  Dr. McKnight rightly states that there is ALWAYS a translation bias.  In fact, I was reading an article last week about one translation “board” that is made up of all men…that on the surface may not seem like a problem but it does “color” translation issues because of inherent male perspectives that are undeniable when reading/working the text.  People in churches and students of mine in University’s inevitably ask me, “what’s the BEST translation?”  Truthfully, the best translation is a conglomeration of many versions of the Bible.  In other words, the most faithful way of approaching the text is to use as many versions as possible.  Like I said, everyone has a specific “take” on the original languages.  Just like you would have a FULLER picture of an incident with multiple witnesses so it is true that when reading the Bible for study divergent translations will serve you best!  So, here’s Scot’s article – like I said, if you are a student of the Bible, this will be “fun” reading for you!

Translation based upon “Tribe” 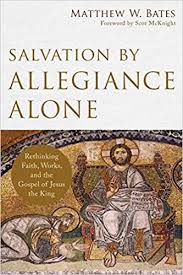 I was reading another great book of late, Salvation by Allegiance Alone by Matthew Bates.  Not only did I find the title provocative but I discovered that Dr. Bates perfectly summarizes what is missing in much of contemporary Christianity’s ideas of faith and what it means to journey with Jesus.  Christianity’s central claim is not only that “Jesus saves” but that “Jesus is Lord.”  Now, for most adherents to the Gospel (that would be Jesus – the Gospel is a WHO, not a what) discipleship is nothing more than church attendance and personal devotional habits.  There is nothing wrong with that to a point…for, as Dr. Bates states, faith is SO MUCH MORE!  Instead of summarizing the book for you, I ran into a blog of a great guy whose blog I follow.  He has some words that are noteworthy and PERFECTLY captures the essence of what Salvation by Allegiance attempts to communicate.  I’ll include some “snippets” of that blog post below.  In addition, I have attached a document that includes everybody blog post written by Dr. Scot McKnight regarding this book (he originally posted these on his blog in 2017).  So, if you want a “deep dive” into the book, download that document.  Otherwise, here’s the “BIG IDEA” of Salvation by Allegiance.

The present-tense reign of Jesus as Lord, who is yet contending against the Principalities and Powers, should determine how we define the meaning of faith (pistis).  The pistis word group can convey a range of meanings. It can mean belief, faith, confidence, trust, conviction, assurance, fidelity, commitment, faithfulness, reliability, or obedience.

But if the stage we occupy in the Gospel story is the present-tense reign of Jesus as Lord and King of heaven and earth against whose rule rival Powers contend, then, as Matthew Bates argues in Salvation by Allegiance Alone, the strongest and clearest definition of pistis is allegiance.

Caesar didn’t care whether his subjects believed in him; he cared whether they were loyal to him.

Likewise, if Jesus is Lord then we are his subjects and faithfulness to a King entails not affectation but allegiance.

Defining faith in terms of allegiance makes clear that what’s expected of us as subjects of the Lord Jesus is an embodied faithfulness that renders the distinctions between ‘faith’ and ‘works’ moot, for a subject cannot be loyal to a King while not heeding the King’s commands.

To be allegiant subjects of this King is not to coerce others into obedience but to conform ourselves in obedience to him, an obedience that might itself call out and invite others to become a part of his people. Added to the scandal of particularity is the scandal that what God has done through a particular crucified Jew is for all people. That Christ’s Lordship is a claim for and over all people; however, does not mean as his subjects we’re tasked with subjugating all people to that claim.

“Our faithfulness to Jesus the Lord entails becoming locally explicit about Jesus” not through Christendom coercion (or attractional manipulation that profits from the vestiges of Christendom) but through “the reign of God being concretely and locally visible in laces around the world.”

“The primary task and indeed mission of the church is its own ongoing conversion to the Lordship of Jesus Christ. Virtually all of the epistles are written to that end. As such, however, the church as a converted and converting people is also itself a constant invitation and call to the citizens of the wider world to enter the life of the people of God.”

Put another way, Christians did not change Rome by attempting to change Rome. Christians changed Rome by living faithfully within Rome as subjects of a different Caesar.

Consider how our own ongoing conversion to the Lordship of Jesus Christ can be conveyed through the liturgy simply by retranslating pistis as allegiance.

For example, the Apostles Creed could be rephrased so it became more obvious what is at stake in the profession: “I pledge allegiance to God the Father, Creator of Heaven and Earth…and to Jesus Christ his only Son our Lord…”

And at Baptism too: “…do you confess Jesus Christ as your Savior…pledge your allegiance to him…”

At the Table: “Christ our Lord invites to his table all who earnestly repent of their sin and seek to give allegiance to him.”

Familiar scripture suddenly become like TNT when you redefine pistis in alignment with our confession that Christ is Lord: “The Kingdom of God is at hand. Repent and become allegiant to me.” Just that verse becomes an altar call that calls for a lot more than your mental assent or an affectation in your heart.

Or (when Jesus said in the Gospels): “Whoever has allegiance [to me] the size of a mustard seed can move mountains.” That’s a mighty word when you remember Jesus has in mind King Herod who, at his despotic whim, had a mountain moved for his palace.

“Jesus is Lord and everything else is bull….”  Hauerwas can make that claim because if Jesus is the present-tense Lord of the cosmos and the response of faith Jesus demands is best understood as allegiance, it quickly becomes apparent that the world is filled with rival lords vying for our loyalty and allegiance.  (Robin’s note – I don’t intend to make you uncomfortable with the reference to Hauerwas’s word choice…I’m just passing on what he wrote…his best effort to make his point absolutely clear).