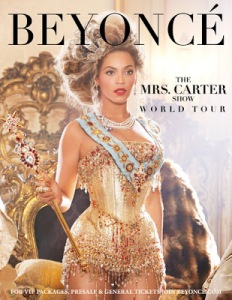 Read whatever you want…Rush, HuffPo, E network, take your pick.  Apparently, singer Beyonce has the world by the, er, throat again.  This is a reflection of rock stardom gone to its illogical, self-absorbed and "idolatrous" extreme. Apparently, we have another "diva" getting a little more honest with the public and saying what all of us have ascertained she really feels by her actions.  Her new song entitled, "bow down to me you B**ches!" says about everything you want to know.  NOW, I'm not a cultural bigot.  I really am not.  I have listened to my share of rock and pop music over the years.  In fact, my dear wife and I have small "disagreements" about the greatness of AC/DC.  But, say what you will, rock stardom has evolved to an entirely new level of idolatry.  With our culture being fixated on fame, fortune, etc. (while at the same time becoming more dependent, apathetic, and "entitled") it is only obvious that popularity is becoming almost "biblical" in its obsession on false "gods."  When you look at our pop culture…try this, look around and attempt to give a totally objective perspective once you have immersed yourself in television, concert footage, press releases, and carefully airbrushed photography.  Look at bank accounts, attitudes and especially the influence of these wonderful people upon future generations.  Look all you want and tell me what you see.  You'll see what any person sees – narcissism and celebrity WORSHIP taken to new extremes.  I remember that it wasn't long ago when producers of concerts started to actually design shows for people to rush the stage.  It used to be that security would keep people away from artists.  Most people attending concerts would be relatively satisfied to sit in their seat and enjoy the music.  Now the artists themselves want the rest of the world to see others basking in the glow of their popularity and hedonistic love of who they are.  Truth is, it isn't even about the music anymore (since most of it is electronically manipulated).  It is about the "idol" that culture is "worshipping."  Understand folks, we are being manipulated by the idol for their own purposes.  It isn't necessarily all for the money.  I think these individuals really do believe in what they are selling…the god-likeness of themselves.  They do believe that their demands for entire floors of hospitals while they give birth to ONE baby, for thousands of dollars of food, room temptatures to be specifically set at certain degrees, and all the other crazy things you and I have heard about just underscore what they want the world to know about themselves…that in some way, they are the new gods and goddness of the modern Olympus.  Now, I could "dig" most of this if it weren't for what happens as our culture is being shaped by their narcissitic idiots.  What drives me crazy is what it communicates to young people about what life is all about.  It used to be that there were occassional celebrities that seemed to transcend pop culture.  They were adored…yes, we had the Beatles and Elvis…I get it.  But I remember reading a book about the Beatle's American tours and how they stayed in the same hotel ROOM while they were touring. Elvis, yeah he eventually became what led to his death.  But this new stuff goes above and beyond, or should I say, above and Beyonce (sorry, couldn't help it).

Many of you don't know that I do quite a bit of teaching on the issue of worldview.  The bottom line of the issue is this – either you are a THEIST and you believe in some higher power to which you are accountable OR you are a NARCISSIST because the only one that is the center of the universe is YOU! The only reason YOU have problems in life is you are a Secularist or Humanist is because somebody else is cutting in on what SHOULD be yours.  There really are not any other options to the issue of worldview…there is either a God or YOU are the god.  Case in point below…you tell me, what do you see?  Take a gander at just some of the lyrics of her song and come to your own conclusions.  ALL I'm concerned about is the next generation…most of us who are a bit "older" understand this stuff.  But between "American Idol", "Honey Boo Boo" and other reality shows where people bask in their fifteen minutes of fame while prostituting themselves to a competition to be selected by an eligible bachlor/bachlorette or some other voyeauristic activity to say that it is NOT making a HUGE IMPACT on future generations is immensely naive.  Little boys and girls are growing up wanting to be the center of attention…being told that they are exceptional and entitled.  Unfortunately, if you think the world is screwed up NOW wait until all you have in culture is competition amongst spoiled brats for attention, recognition and fame.  Wait until all the little "gods and goddess" start mixing it up a bit because they are not getting what they demand.  Wait until more than ONE little boy or girl is saying, "bow down" and see what we as a culture net.  OK, I'm stopping here.  You can look at the lyrics and check out the video link for yourself.  Adios amigos!