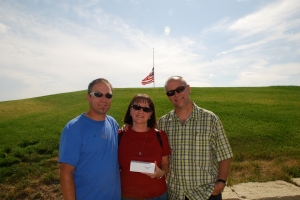 Last night at the training team for the Missional Project I am facilitating, we had a time of sharing…it builds community and trust as well as gives us an opportunity to keep our focus on human issues that are shared by every person…not just followers of Jesus.  Well, we were talking about people of influence in our lives…about being Influencers in life not just the Influenced…about aggressively committing to walk with a heart and passion to positively influence and effect grace/mercy in the midst of life.  As I asked the question of "who in your life has been a huge influence on you", my step-son Shad remarked, "my stepdad, Robin"…he went on and on about the impact I had made on his life…it was a humbling experience…so many times as a parent, you wonder how your actions and words shape a child's growing and maturing life.  You dream of making an impact…you realistically know that the child will probably spend some time in therapy because of the stuff you said or did.  But Shad's affirmation touched my heart…it is hard to even say how…it was deep, meaningful and will stay with me for the rest of my days.  That's the power of affirmation…don't wait until the last minute to say to someone how they have influenced you…tell them now!  (By the way, this is a picture of Shad, Vicky and myself as we were scattering the cremated remains of Vicky's brother who passed away last month.)